Cowboy Country and the Old West

1
4
As a child of the Pacific Northwest, I grew up directionally challenged
in no small part because of states like Texas. I had some vague notion
of “the West” and I knew that it generally meant Texas and cowboys. What
I couldn’t wrap my brain around was the fact that Texas–the West–lay
to the east of Oregon. Add to this the fact that when I traveled
to the East Coast (which I did frequently, to visit relatives), I told
people I came from Oregon. Their response: “Oh! So you’re from Out
West!” I therefore lived to the west of The West, which was east of me,
while simultaneously living in the Pacific Northwest, which sometimes
included parts of Canada and Alaska. Did I live in the Old West? Along
the Pacific Coast? Was home more like Helena, people wanted to know, or
more like Bellingham? If I could have told them at the time, I might
have said home was in my head (already I was deeply observant,
registering the kind of detail one might expect of an OCD novelist).
But now that I’m here, in The Real Old West, it’s clearly the middle of nowhere. I’m 2.8 miles to a paved road, 25 miles to a town of 900 from there. I like it that way, and if I wasn’t such a sissy about the heat, I might call parts of this Hill Country truly loveable. Heat or no heat though, I always love a good story and back in the 1800’s, The West started just about right here. When the United States was only 100 years old, this map reveals that its “most populated” area was still less than half the nation. The grey areas on this map signify over six inhabitants per square mile in 1876. Take note of that line down the 98th meridian. I’m about 2 hours southwest of San Antonio and back in the day, everything to the west of that line was populated by just 2 million people. If you ask me, that much space is bound to lead to some good stories and that’s what makes Cowboy Country and “the Old West” so immortal. 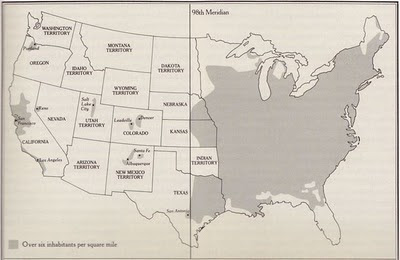 Not everyone felt that way at the time, though. Daniel Webster was quoted in 1838, saying: “What do we want with this vast, worthless area? This region of savages and wild beasts, of deserts, shifting sands and whirlwinds of dust, of cactus and prairie dogs?…I will never vote one cent from the public treasury [for postal service] to place the Pacific Coast one inch nearer to Boston than it now is.” Thanks to historian William H. Forbis, who pointed out that naysayers like Webster failed to see the importance of one life-saving element in this “worthless area”: grass. And not just a little. Enough to support more than 75 million buffalo and, later, countless head of cattle.
Enter: the cowboys, and thank goodness for them. Here’s a batch of young’uns (as most were) dressed for the camera. Contrary to popular belief, they didn’t normally carry weapons. There was too much risk that something could snag while roping a calf or breaking a green horse. But when it came time to pose, pose those cowboys did. Many of their stories unfolded from there… 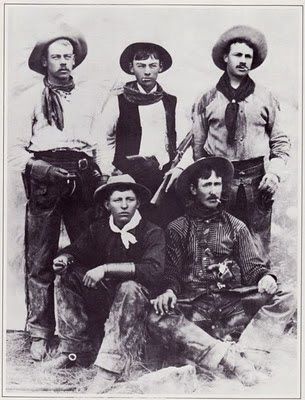 Cowboy Fact of the Day: I’ll quote Forbis again, because his summary is so spot on. “The American cowboy was actually a dirty, overworked laborer who fried his brains under a prairie sun, or rode endless miles in rain and wind to mend fences or look for lost calves. Yet the cowboy had a heroic image of himself as a hard-riding, fast-shooting hombre, and that is how he appears in books and paintings of the Old West. The image did grow from a seed of reality. Some cowboys actually shot it out with Indians, or broke wild horses and lassoed bears…In making [cowboys] seem larger than life, [books and paintings] caught the proportions of a greater reality: the sense, shared by the cowboy and in time the entire nation, that he was indeed the hero of his country’s boldest legend.” [Note: Here’s my post about an aspiring cowGIRL.]
Showing 4 comments