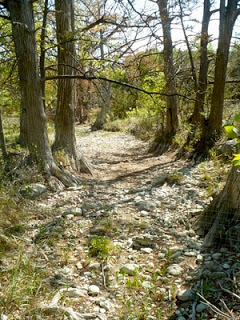 It’s so dry you could spit and something might catch fire. Creek bed after creek bed, mile after mile; the earth thirsts for itself. [Wallace Creek, at right.] To my eye, it’s not the kind of drought where everything has died. Certainly I’ve driven past entire groves of dead trees, acres of dried shrubs, miles of dead grasses. But mostly what I notice is this: certain trees have given up, their craggy arms sagging toward the ground, their branches bare of leaves. The others though, have opened fully–oddly, almost–to the sky, an arboreal version of surrender; as if to say, I’m at your mercy.

Thunder claps in the near distance and I wonder where the bison are today, if they scatter like buckshot when the storm gets this close. The deer have disappeared, tucked into the hills and dried cliff hollows, waiting. Even the birds grow silent. Lightning catches overhead, sparking from cloud to cloud. When the rain finally comes, it’s hard not to think it’s sanctioned from the divine. 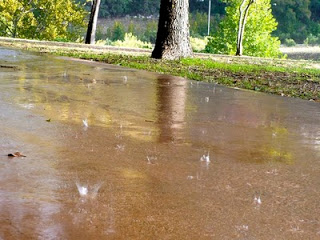 To the south: sunlight and the impossible splashing of droplets all at once. To the north: clouds darken the Texas hills. All around: the pungent, almost forgotten smell of water. In between: the glorious shock of a double rainbow. 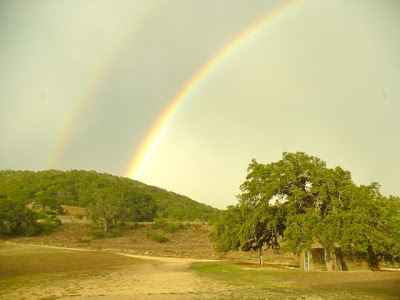 When it’s over, the world grows doubly silent. It’s as though I can feel the quickened pulse of the natural world, breathless from gulping so much, so fast. I gaze at the sky. The storm has moved to the next ranch, the next ring of hills, the next thirsting watershed. Here at Madrono, everything has cooled by ten degrees.

I marvel at puddles–the first I’ve seen in a month. Tomorrow’s sun will burn this off. But like the trees, I’ve soaked up something from this storm that my body will turn into the intangible: life lived a little more fully, if only for a few fantastic moments.

Cowboy Fact of the Day: Cowboys rarely owned their own horses. Instead, horses were provided by the ranch they worked for. The most common cause of death for cowboys was being dragged to death by a horse.