0
0
It’s been thirty-six hours and already my vocabulary expands: a hill is so much more than just a hill. Out here in Texas Hill Country, they make perfect natural boundaries, create walls of privacy, and as Susan Brind Morrow’s definition of “hill country” in Home Ground points out–hills are manageable mountains:
“Hill country is a term that has been associated with poverty, the reason being intrinsic to the nature of hills–erosion on sloped land: soil vulnerable to being washed away is poor. Another aspect of the nature of hills is relative inaccessibility. ‘The hills’ are a place of isolation, meaning rural character. Think Appalachia: hillbillies come from the hills. Rural character traditionally suggests not only a course ruggedness but also toughness and independence. When richness of soil no longer matters, the hill country (like the Texas hill country outside of Austin) is ultimately sought as a place of authenticity, regionalism as a kind of aesthetic. Another feature of hills is that one can easily hide in them–as the Scottish highlanders, outlaws of the American West, and the mujahideen of Afghanistan have demonstrated; the hill country traditionally serves as a fortress also for fierce guerrilla fighters who descend from them to sack the cities in the rich flatland below. The hills as manageable mountains accord refuge–hence the Old Testament verse, ‘I lift mine eyes to the hills’–and were the refuge of anchorites who went to find religious retreat outside a nearby community. The shapes of hills form a knowable landscape. They connote permanence, something to go toward and back to, as Arlo Guthrie sings in an old folk song: ‘Way down yonder in the Indian nation riding my pony on the reservation in the Oklahoma hills where I was born.’ Something familiar, remembered, home.” 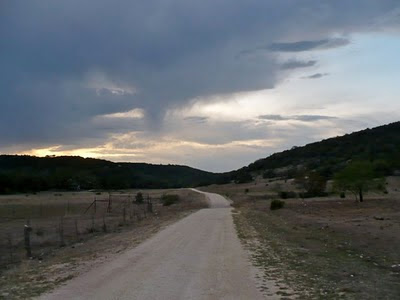 I’ve been able to catch sunrise and sunset both days so far as a writing resident at Madrono Ranch, and that has as much to do with enjoying the view as it does practicality, for another aspect of Hill Country is low rainfall (less than 20 inches per year) and undying heat. If I can get my “outside time” in before the sun cranks up, I’m much happier. Just how dry is it? I drove over 8 bone-dry creek beds in a 12-mile stretch, not to mention the Medina River itself (which looks like anemic scabs of clay right now). And how hot is it? Tonight at 6:30 it was still 100 degrees outside. I’ve been taking most of my photos at dusk, yielding lower quality, but this view of the lower road near the lake house shows what I see when I look to the west. Those are “Texas hills” on either side of the road, and folks around here call that space in between a “canyon.” Coming from the Pacific Northwest, it’s certainly not a “valley” with mountains on either side. Coming from Appalachia, it’s certainly too long and shallow to be a “holler.” But when I think “canyon,” I think this, and so my mind is still working its way around the local nuances.
I’ve explored up and down the road a few miles both directions (the ranch manager lives 1 mile away) and it’s gloriously private. I haven’t ventured too far off the road, though. Not yet, at least. The lake has water moccasins and snapper turtles. The scrub has cacti with spikes longer than a finger. Oh, and did I mention rattlers and scorpions? Like me, these creatures prefer a bit more activity at dusk. But unlike me, they have venom that can kill.
Cowboy Fact of the Day: The average age of most cowboys was 24 and 1 in 3 was either Mexican or black. Cowboy culture lasted from the end of the Civil War until the mid-1880’s and during that time they numbered just 40,000.