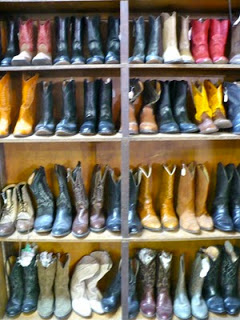 Now it wouldn’t be right to stay in Cowboy Country much longer than week without giving more of a nod to the fellows themselves. I’ve seen my share of boots and hats in Bandera already, and I’ve felt the gazes from those who see I’m not local because I’m simply not wearing either. At the general store on Main Street a decent pair of real leather boots can be picked up on the fly if you don’t mind a used pair. Vests and hats cost extra, but not too much, and before you know it you’re out the door looking a little more local. [Like the grey ones on the bottom right? I bought ’em for $40! A steal for my big-lady feet.]

Of course, there are still cowboys out there today, but they’re a different breed than the cowboys of the Old West just as ranches once owned by families or run by cattle barons are nowadays often sold to corporations. My interest is with the fellows from times past, and in particular their day-to-day uniform. (Well, I might be interested in today’s cowboys too, but not in mentionable ways…)

It goes without saying there had to be a hat. But whether a cowboy would choose a sugar-loaf sombrero, a plainsman, a Montana peak, or a Texas hat was up to the individual cowboy, his income ($35 per month, if lucky), and his location. Everything had a purpose, right down to a hat being used to carry water or a bandana being used as a tourniquet for a rattlesnake bite. Other decisions came into play as well: Would he wear Spanish colonial spurs, OK spurs, work spurs, or the occasional dress spur? Did the cowboy prefer earlier boots with a low heal, or the later model with mule ears that made them easier to pull on? Would he ride with shotgun chaps, batwings, or woollies when they were in season?

What could a man like this possibly look like when you put it all together? Well, without his horse, cowboy Jo Mora once said that a cowboy was “just a plain bowlegged human who smelled very horsey at times, slept in his underwear and was subject boils and dyspepsia.” But get a horse under him, get him on a round up or cattle drive, and it wouldn’t be long before every piece of his uniform had a purpose in action. 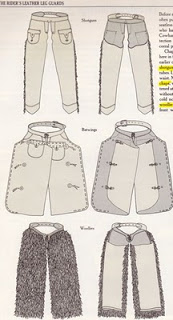 Thanks to a little research, I’ve learned that this uniform was not wholly trademarked by the American cowboy. In fact, more than fifty years prior to the cattle industry of Texas, Spanish vaqueros did everything American cowboys became known for and then some. The main difference: to the vaqueros, profits came from hides and tallow; to the cowboys, profits came from beef. But it was the vaqueros who called their rawhide rope la reata, Americanized as lariat. It was the vaqueros who made quick turns of la reata around a bull’s horns to bring it to a stop–they called this dar la vuelta, Americanized as dally. Their chaparreras became chaps and their rodeo became roundup. Even the name vaquero (from the Spanish vaca, for cow) became buckaroo. [These translations are paraphrased from an essay by William H. Farbis, 1971.]

Cowboy Fact of the Day: Most cowboys prided themselves on having small feet, lest they be mistaken for a lazy ground dweller.