Looking Back at Lost Crossings 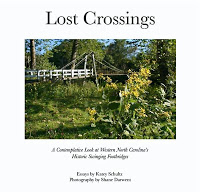 In 2008, I got a hair-brained idea. I called my hair-brained friend Shane and together we decided to embark on a year-long writing/photography collaboration without pay, just to see what happened.
What happened?
We ended up generating a lot of interest from the surrounding Mitchell and Yancey Counties in North Carolina, raising $2,000, and using those funds to publish a chapbook, print and frame large photographs, and put on an exhibition at Crimson Laurel Gallery.
Our focus? Thirteen forgotten, beautiful, swinging footbridges. 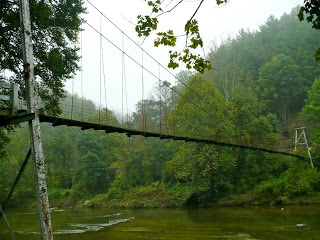 After the gallery exhibition (which sold every copy of the first edition, every photo, and every map), things only got better. Lost Crossings: A Contemplative Look at Western North Carolina’s Historic Swinging Footbridges, continues to sell today. It was reviewed in local papers, written up in regional magazines, and this week a film crew from UNCTV is driving all the way out to my parent’s house to spend two days with me as we traipse around the counties and film those famed footbridges for a TV segment.
All of which sounds wonderful until I tell you this:
When the Producer called and told me about the TV segment, I cringed. Not because I don’t believe in the project. Not because I didn’t want to do it. But because it meant I’d have to go back and actually read my own book.
Many writers will tell you that once something is published, it can be painful to sit still and read it start to finish. Most of us simply refuse to do it. I suppose this is partly because once it’s published, there’s no going back. There’s always the terror of finding a typo you can’t do anything about, an error in logic you’ll have to live with forever, or–gasp–a misquote that burns a friendship. When it came to re-reading Lost Crossings, my fear was that it would sound quaint. That I’d read it and be able to see a recent MFA graduate still playing around with creative nonfiction, touting it as the real deal when everyone could see it still needed polishing.
The camera crew shows up tomorrow, and I had to spend today sitting very still on the couch re-reading my own book. It required two cups of coffee and some chocolate chips, both of which were great. But what was even better was discovering that, well, Lost Crossings really did do something right. A couple things, actually. The aesthetic is there, it’s complete, and it’s consistent. The intentions are clear and relatable. The prose is informative but pays more attention to creativity and language than reportage. And when it was all said and done, the essays felt…well…like little, lovely, visitations. Which is exactly what I wanted when I got that hair-brained idea in the first place.
Sure, I didn’t turn the book into a travel guide. I didn’t turn it into a coffee table book. I didn’t even turn it into a through-and-through historical document. But the photographer and I turned it into something with staying power, and now that I’ve gone back and done the hard part, I might even be ready for the big screen.
Footbridges, here we come!
Don’t own the book? I’d be honored to share it with you. I’d even like to give it away for free, but the costs of printing are too prohibitive. But here’s a preview of the project, and here’s a link to buy the book, and here’s my word–published publicly–that if you don’t like what you read, I’ll give you your money back.
Showing 2 comments