0
1
Last week I wrote about the Crawford Cemetery, high on a hill above Sweet Briar College. A few days following, I ran into an archeology professor while biking around campus and he told me how to find my way to the slave cemetery. “Cross the damn at the bottom of Boathouse Road,” he told me. “Then stay on the path that goes uphill. You’ll see it in about 100 yards. Can’t miss it.” A few other Fellows that were here last month told me they, too, had found the cemetery without trouble–so off I went, for my final bike ride as I near the end of my residency here at VCCA. 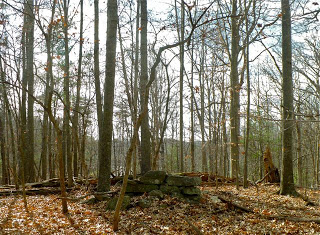 But try as I might, I couldn’t seem to find it. I thought there might be a good chance the graves–probably without headstones–were covered by the thick leaf fall here in the Shenandoah woods. But there might also be a good chance I simply missed it, as I was delightfully distracted by traipsing wild turkeys, squirrels fussing over their middens, and the unusually balmy air. What I did find was this–clearly evidence of human activity (look at the stacked rocks) and also in approximately the right spot according the professor’s directions–but I can’t say I even knew what it was. Little did I know I’d find out more at supper time and end up on a night visit to the real spot, across a different damn, where the cemetery sits in a clearing on a hill.
A little dismayed, I rode back, stopping to see the President’s House (formerly the slave plantation owner’s main home). Behind it sits a small 19th Century rustic cabin that housed slaves. At one point in time these grounds were scattered with 16 such cabins. Looking across the campus and beyond, one can only begin to imagine the complicated history these hills hold. 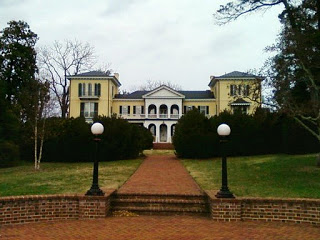 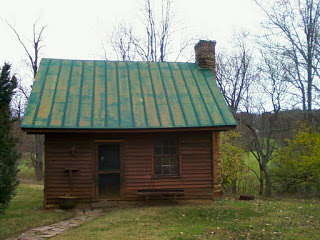 Later that evening, my fellow Fellows set the record straight, telling me where I’d gone wrong on the walk and exactly how I could find the cemetery on my next visit. But why wait? After a few rounds of ping pong, we loaded up in THE CLAW and headed over to campus, headlamps a-glow. A simple, open clearing revealed nearly sixty stone markers, according to the interpretive sign, but to a novice’s eye these stones were hardly recognizable as grave markers. It was illegal to teach slaves to read and write, so none were marked, but a dedication ceremony in 2003 scouted out around numerous depressions and headstones, indicating the burial grounds. A nighttime photo hardly captures the stories these stones must hold, but here it is nonetheless. 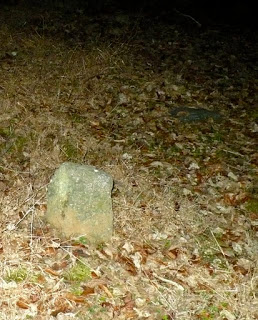