Alaskans are serious about their winter boots and for good reason. Down in Southeast, I stood out because I didn’t own Xtra Tufs. I was approached more than once a week by someone wondering what I was wearing–not necessarily because they approved of my footwear (after all, when in Rome…), but exactly why I still couldn’t be certain. “Oh, these are nothing special,” I’d tell folks. “Just boots from Beans rated to -20.” And it was true, the boots are good enough, but not cause for any catalogue rush orders.

It wasn’t until I got to Anchorage and a few more people asked me about my boots that I figured out what was really going on. “Are those Bunny Boots?” two people asked me in the same day–total strangers, mind you, approaching me as I stood in line or waited at a cross walk. “Bunny boots?” I asked. “Oh,” they’d say when they got closer. “I guess not…”
As it turns out, my boots from LL Bean are the same, creamy snow color as Alaska’s own military-issue Bunny Boots, and they’re bulky and insulated too. But my boots have a dash of rust-red along the tongue and trim, a fashion flare unheard of in Bunny Boot world and probably the cause for so much inquiry. Was Bunny Boots going trendy? Had they issued a new line? Of course not, people realized as they approached and saw my Beans boots lacked the tell-tale AIR VALVE on the side of all Bunny Boots.
A little research revealed the true wonders of Bunny Boots (the black ones are called Mickey Mouse boots, but they only go to -20), including an air valve that can be opened or closed to release pressure when flying. Letting air into the three 1/4″ thick wool layered lining helps keep these warm boots even warmer. Sure, that air might be cold at first, but the body’s own heat and wool’s retention quickly heat that air and keep Bunny Boots warm and getting warmer. Additionally, the insulated layers are separated by waterproof rubber so that even if your boot and foot get totally submerged, the lining does not get wet. The boots are rated to -65 degrees! 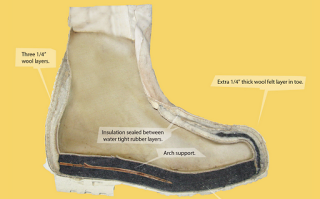 Why are they white? To blend with the snow, of course. Just ask any far north soldier out on patrol if he or she would rather wear standard-issue green/brown/black camo or white camo and you’ll get your obvious answer. Meantime, the military may be one of the largest Bunny Boots customers, but it’s not the only one. Bunny Boots are locally made and locally sold, in true Alaskan spirit. Anyone can wear them!
Showing 3 comments