0
0
I spent some time flipping through primary source material this weekend, searching for first-hand impressions of early Anchorage. Back in the 19-teens, Anchorage was just a tent city of folks come to help start the railroad. Delaney Air Strip was still another decade off and statehood still more than 40 years away. I wonder about the likes of folks hunkered down in these tents at the foot of what is today Government Hill–families, adventurers, prospectors, fishermen…Was there a universal sense of community or did one have to fend for one’s self? How did things change over time?
Here are a few quotes from people who would know: 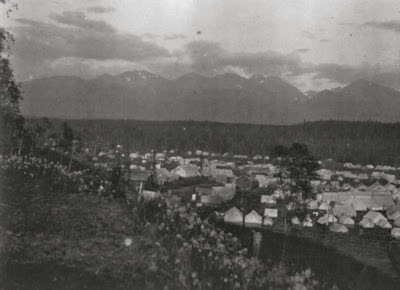 Nellie Brown: “We were all one big family in those days. We didn’t lock the doors at night and the coffee pot was always ready for everyone to help themselves. For greens, I cooked goose tongue, lamb’s-quarter, fireweed and dandelions. For amusement, we played cards. Everyone went to bed at 9 p.m. in 1915.”
Larry “Rocky” Cummins: “The first time I saw Anchorage was in 1926. It was the toughest looking place, all burned off. You could’ve bought the whole town for $10,000, it was just a bunch of little cabins that no one lived in. If you wanted to, you could just move into one of them…The town was fairly tame. There was only one policeman and he had nothing to do. The whole time I was there, there was only one murder.”
Patsy Bowker James: “It was a very nice little town, not rough at all. There was lots of law and order. We only had one policeman, so you can see how rough it was [in the 1920s]. If someone got into trouble, they gave him a blue ticket [a passage out of Alaska], so he’d go south and wouldn’t come back. We had only one boat a week, and everybody went to the Post Office to visit. There were no telephones, so you had to rely on each other for fun.”
Margret Pate, who arrived from Portland, Oregon in 1942: “We arrived safely and went blundering around Anchorage, trying to adjust to the continual daylight, to the delight of those who had already been in Alaska for a week or so. The city itself was an eye-opener. 4th Avenue was paved only a few blocks. There was nothing much on 5th Avenue. There were lots of cabins scattered around on trails, and homes on unimproved roads…Other than the military comings and going at the base at Fort Richardson, the bars seemed to be the main activity in town, with a surprising number of nice shops.”