0
0
Delaney Park isn’t far from where I’m dogsitting and, at first glance, a non-Alaskan might think that it was truly forward-thinking of the city of Anchorage to designate five continuous downtown blocks for a beautiful greenway. As it turns out, preserving the park as a greenway might have been forward thinking, but that didn’t happen until the 1950’s. For nearly 30 years prior, the park served as early Anchorage’s primary air strip. Makes sense, if you look at the proximity to water (in the upper left corner–frozen white stuff) and the length of cleared land. Thanks to Google maps for this one:

According to Anchorage: Early Photographs of the Great Land, it took the entire town’s efforts in 1923 to clear the landing strip (or “The Park Strip,” as 21st Century Anchorage residents call it today), which is 16 acres. Not long afterwards, the first flight from Anchorage to Fairbanks was completed. To finish the flight, the pilot had to follow the railroad, glimpsing it from his hazy cockpit some thousands of feet above. It sounds like no small matter given the fact that these days 1 in every 78 Alaskans is a certified pilot (more per capita than any other state) but, at the time, Anchorage had only been publicly committed as a town 9 years prior.

The Anchorage Daily Times reported not long after the project’s completion:
“It was one occasion when everybody worked and there were no shirkers. The highest Alaska Engineering Commission official threw his shoulder under the fulcrum with the brawny, big upstanding private in the industrial ranks. Men whose hands had not been soiled by anything heavier than a pen for many years, grappled the mattock or the axe and shook the kinks out of this flabby muscles. Ladies with rakes and other implements cleared away the small mountain of stumps ready for the torch.” Two days later, the air strip was completed.

A few summers ago, I visited this park not knowing its history. This afternoon, I tried for the same photographic angle but ended up more infatuated with the late-afternoon clouds. The images below show both attempts. Delaney Park does in fact have pathways and benches and trashcans…they’re all just buried under snow right now! 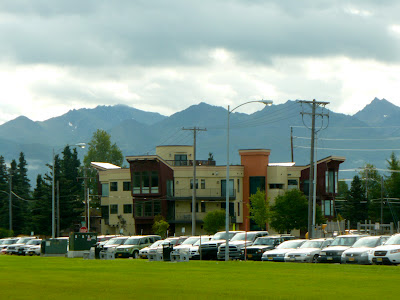 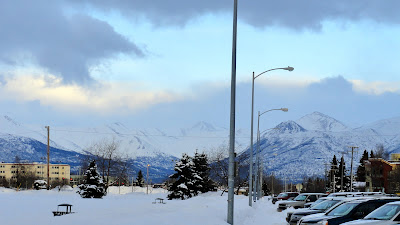