The Writing Studio: New Screens for the Airstream

0
0
It sounds simple when the guys on the DIY instructional videos talk about it. Indeed, even to folks who aren’t that “handy,” the idea of replacing screens sounds do-able enough. Unscrew the frames, rip out the old screens, cut new screens to fit, and press ’em in. Right? Uhhh…
For starters, the screws holding the screen frames in on the Airstream Sovereign haven’t been touched for 42 years. It took Dad’s strength, more than a few power tools, and a few old carpenter’s tricks to get the screws for all 8 windows off. But even before that, we had to remove all the handles and armature for each window (pictured in the white container in the bottom left corner of this photo).
By the time the screen frames were finally off, Dad’s wrist was swollen but at least at that juncture I could jump in and make myself useful. Here was my to-do list: remove and save the spline (that’s the grey piping that secures the screen to the frame), wire-brush 42 years worth of bug guts and oxidation off the grooves in the frames, peel the frayed bug guard off the backs of the frames, and apply adhesive removal to the hot glue gun gunk that formerly held that bug guard in place. Here are a few process pics to illustrate:
While I was at it, I decided to spray paint the screen frames with Rust-All (spray paint for metal) in an almond/beige color that matches the vinyl siding on the interior of the Airstream. The original aluminum was just too beat up for my tastes, and while we’re not heavy into the detailing work on the trailer yet, there are some small jobs that just make sense to tackle while you’ve got all the parts laid out before you. And my, did they look pretty once they were all cleaned and ready for new screens! 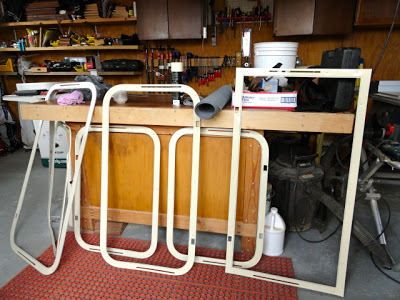 Pressing the spline into the grooves on the screen frames proved a lot trickier than the how-to video demonstrated because most of the frames we were dealing with were slightly warped. Forty-two years on this planet will warp anybody, if you ask me, trailers being no exception! Some clamps, some teamwork, a little cussing, and only a few hours later we were good to go–new screens fitted and razor-trimmed to fit:

Tomorrow, the new bug guard arrives in the mail and we can adhere it to the backs of the frames, spray paint some of the armatures with Rust-All (silver, this time–for the handles and what not), and screw those puppies back in! Meantime, I took the shop vac and sucked up all the gunk in the window gullies. I’ll spare readers the details of what I found in those gullies; suffice it to say, they look much better than 24 hours ago… [Just catching up with the Airstream posts? Here’s a post with links to other process pics.]