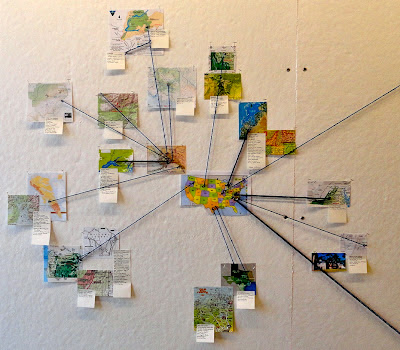 I’ve been trying to cipher a map that represents my 2 1/2 years on the road and for months I’ve been coming up short. Would I map routes of travel by car? Plane? Foot? Would side trips count? How could I indicate mountain summits or reunions with friends, walks with the dog or hours at the desk? Would I use color coding and digital animation, or pencil and paper? How could I indicate return trips or trips that occurred once in reality but many times in my mind? Could I apply layers correspondent with the depths of my experience–a sort of topography of the heart?

The more I reflected, the more impossible my map-making task appeared, until I picked up The Wild Places by Robert MacFarlane. He describes his own essays as “a prose map” of the remaining wild spaces in England, Scotland, Ireland, and Wales. In the spirit of Thoreau with a 21st Century meditative essay twist, these essays explore the microscopic and the cosmic, the technological and the intangible, revealing layers of meaning that go beyond measure–as opposed to quantifiable, two-dimensional maps that insist upon single layers of fact. He writes:

“Maps…held in the mind are alert to a landscape’s volatility as well as its fixtures. They tell of the inches and tints of things. They are born of a sophisticated literacy of place, rather than aspiring solely to the neutral organization of data. We cannot navigate and place ourselves only with maps that make the landscape dream-proof, impervious to the imagination. Such maps–and the road-map is first among them–encourage the elimination of wonder from our relationship with the world. And once wonder has been chased from our thinking about the land, then we are lost.” 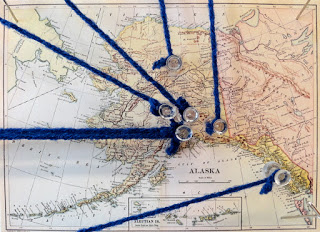 MacFarlane’s concept appeals to me not only because it seems true, but also because I’m interested in the notion of layering and the craft of creative nonfiction essays. Can a writer portray periods of geologic and human history beneath one’s personal experience? What about other layers, such as first impressions, moments of confusion and loss, or specific moments where time seemed to stop? Can a writer speed up time, slow it down, zoom into a setting, and zoom back out?

Yes to all of these, but therein lies the challenge. Which tricks of the trade will best weave the narrative threads of my story? What story am I telling in the first place? Certainly not the story of the thirty-something-writer-hits-the-road. That’s too literal for my tastes and tends to lock me into chronology and fact. Herein lies the challenge, because in order to figure out what story I’m telling, my process demands that I begin with something outside of myself–something big, tacked to the wall, something very much like…a map.
These photos represent my humble beginnings. The base layer indicates the places I have been, and a careful observer will not miss the metaphor of the string: I am tied to each of these places as the string is tied to the tacks. Likewise, some places appear to have thicker “lines,” which are really just several strands of yard tied along the same track. This layer can be intuited accurately to most eyes, but eventually I’ll be adding layers (sounds? video? other colors? outer rings?) that don’t immediately translate.
In the end, I hope to have a map that inspires the opening lines of new essays. Essays that explore the layers in front of me with a reflective tone. Essays that can walk through the prose-terrain of my next book and tell, as MacFarlane says, the “inches and tints” of things.