0
7
I’ve heard rumblings for over a year now that our Micaville Post Office at the intersection of Highway 19E and 80S in Yancey County, North Carolina, might be closed. So you can bet when I heard about Wednesday’s community meeting to help save our post office, I was going to show up. Apparently, I wasn’t the only one: 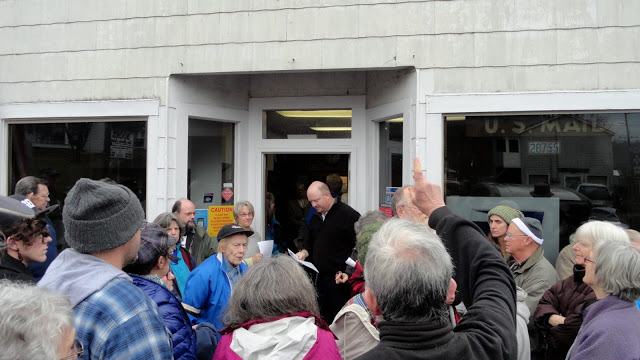 After atending the meeting and doing a little research, I learned that the rumors I heard about the closing were based on a dated United States Postal Service plan–one that originally announced it might close as many as 3,700 post offices. According to CNN, that plan suggested such closures would help the USPS deal with its $20 billion deficit. But for all its damage, that plan would only save $200 million. What damage, you might ask? Up to 4,000 lost jobs; 3,700 vacant offices; and countless towns losing their identities as their names and zip codes were deleted for postal efficiency. Not to mention the added fuel use and costs for all the citizens forced to drive upwards of 40 miles (think: Montana) to mail a package.

According to a study by Reuters, the closings proposed by the original USPS plan happened to zero in on rural, poor communities with unreliable broadband Internet service. For obvious reasons, those post offices were not generating as much income as, say, one located in Times Square. The study also found that about “2.9 million people live in the rural communities where the post office that may close is either the only one or one of two post offices serving their zip code area.” That’s certainly true for our Micaville post office, as every person I know down this narrow stretch of Highway 80–for at least ten miles south of 19E, and surely many more fanning other directions–uses our coveted, leaning, small, white post office adorned with old-fashioned, brass, letter-dial locks on its rental PO boxes. 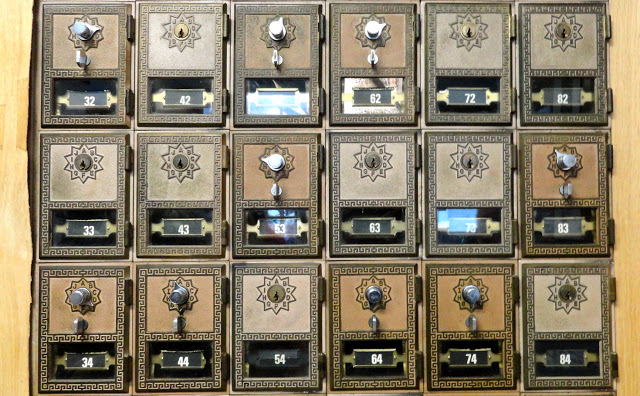 There was so much talk about this plan, in fact, that we lost our dear Postmaster Brian Hensley of Bald Creek (though I won’t purport to speak for him), who wisely took a job at the Barnardsville Post Office before his job and livelihood were in too much risk. Should our Micaville Post Office be closed under his tenure, he could have been relocated anywhere in the United States. The USPS is, after all, a national organization. We miss Brian, but I’m sure glad he found another place to work–though I’m certain his commute time and costs have nearly doubled.

Here’s where the rumors die out and the updated information comes in: that intial plan proposed by the USPS was modified. They did some math and listened to the outrcy and, in May 2012, announced a modified plan. Patrick R. Donahoe, the Postmaster General stated to the New York Times: “We’ve listened to our customers in rural America and we’ve heard
them loud and clear–they want to keep their Post Office open. We
believe today’s announcement will serve our customers’ needs and allow
us to achieve real savings to help the Postal Service return to
long-term financial stability.” According to the press release from the USPS, “The [new] plan would keep the existing Post Office in place, but with
modified retail window hours to match customer use. Access to the retail
lobby and to PO Boxes would remain unchanged, and the town’s ZIP Code
and community identity would be retained.”

It’s worth noting that the Burnsville Post Office is “only 5.9miles away” from the Micaville Post Office. But that’s an extra 12 miles round trip and for many folks in rural counties that drive trucks, that’s a gallon of gas. That means folks could end up paying $4 extra in gas just to get the post office. And although our Micaville Post Office is staying open for now–they’ll reconsider the issues and send out another survey in 1 year–the office hours have been reduced drastically. Now, we will have service Mon-Fri 9:45am to 4:30 pm with a closed lunch break from 12noon to 12:45pm. Many 9-5ers will be forced to take their business elsewhere. Likewise, these hours mean the post office won’t be open when, for example, loads of parents are dropping their kids off at neighboring Micaville Elementary in the mornings and it won’t be open late enough to accommodate teachers or government employees passing through Micaville just minutes before 4:30pm.

One helpful thing I did learn is that residents using the online services at usps.com can use the return zip code for Micaville in their address (28755 instead of 28714) and that transaction will be credited to our Micaville Post Office. The greater the number of transactions, the better our post office looks when it comes up for re-evaluation a year from now. This also means that if you tend to buy stamps all at once–say, half a dozen books of stamps at a time–that is only one transaction. It’s better for our post office (at least on paper) if you break your purchases up into multiple transactions, even if it means getting back in line or purchasing stamps every week instead of every month. If you live in a rural area and your small post office is up for review, these tips will also be helpful to you.

I can’t say I left the meeting feeling fantastic about the state of things. Sure, our post office is saved for one more year. Sure, we had a decent turnout. But less than half the surveys were returned. There were perhaps 40 people at the meeting–which was held at in the middle of the work day–when I know many more would have liked to attend. We still have a few more days to fill out the survey for those who missed the meeting, but you’ll have to get a copy yourself (at the post office), as they won’t mail it to you if you have a 28714 zip code even though you’re closer to the Micaville 28755 Post Office.

All of that said, I’ve always been a fan of our postal service and am amazed by its accuracy and scope. After all, their website states: “The U.S. Postal Service
is the only delivery service that reaches every address in the nation,
151 million residences, businesses and Post Office Boxes. The Postal
Service receives no tax dollars for operating expenses, and relies on
the sale of postage, products and services to fund its operations. With
32,000 retail locations and the most frequently visited website in the
federal government, usps.com, the Postal Service has annual
revenue of more than $65 billion and delivers nearly 40 percent of the
world’s mail.”

Which reminds me of an easy solution that no one seemed to mention more today: send more mail. Write more letters. Send a gift card instead of an e-gift card with a link in an email. Send a real birthday card. A real thank you note. Sure, real mail uses paper, but most paper is recycled nowadays and now you know your money literally does count–at least in the 28755. Email, on the other hand (and this blog, for that matter), exists in “the cloud”–also known as gigantic electricity-sucking data storage warehouses such as those run by Google or Amazon.com, the latter of which has recently rung up over half a million dollars in EPA violations. Sending a real letter in person at the Micaville Post Office, on the other hand, isn’t likely to land anyone in court for a violation. On the contrary, it’s more likely to land you in a delightful conversation with a friend from the area you haven’t seen in a while. Before you know it, you’ll discover you’ve been gabbing for twenty minutes and, come to think of it, don’t you need to buy some stamps? Yes. Yes you do.