0
0
[There’s a flash fiction video at the end of this post!]I’m pleased to be one of this year’s featured authors at the Carolina Mountains Literary Festival…and even more pleased that part of this includes celebrating new flash fiction written by the artists of Shortbus Studio. According to their website, “Yancey Residential Services is a private,
non-profit agency which provides a variety of programs and services to
individuals with serious developmental disabilities such as mental
retardation, spina bifida, cerebral palsy and Down Syndrome. The agency recently opened an outsider art gallery called Shortbus Studio.
The studio provides adults with developmental disabilities an
opportunity to express their natural artistic ability and sense of
humor.”

I have taught flash fiction to well over 1000 children in Oregon, Michigan, and North Carolina…but I have never taught adults with serious developmental disabilities. Today was our first day in the Studio and I have to say–we had a blast! The artists had been primed for my visit by studying “main ideas,” “details,” and “paragraphs.” When I arrived, I told them we would be writing stories that were one paragraph long.

“I make people up for a living,” I told them. “When you’re a writer and you make people up, you call those people characters. Characters are a lot like imaginary friends.” Lights of recognition shone across their faces and I knew we were going to have a good time. 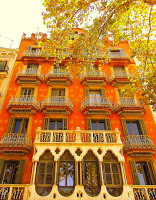 As the lesson progressed, I told the artists that in order to write about a character, you have to pretend that your body is their body. This really got their attention. How do you pretend you have someone else’s body? What would that feel like? We discussed the five senses and made up our first flash fiction together. I offered the first line of the story, asked guiding questions, offered a few more sentence starters and verbs, and we were off and running. Using the photograph at the right, we created a character name Ryan who was a tall, blonde-haired cowboy singer traveling to New York City on tour. He was staying in the top floor of this hotel and he felt happy about his music, but he also felt lonely. Using the five senses as our guide, here is what we wrote:

Ryan had never seen anything like it before. He looked out the window at the tree. It was a rainbow of different colors: red, yellow, blue, and purple. It made him feel ecstatic and nervous. He thought about writing a song. He heard the busy city: honking, voices, and high-pitched birds chirping. He smelled Chinese food, Mexican food, and garbage. He wrote the first line of his song: I wish I had a girl in a rainbow tree.

As an educator, there were a few things I learned within the opening moments of class that I had not anticipated: when someone in your classes uses a wheelchair, you have to be mindful of the white board location. Those of us who aren’t in wheelchairs can easily take for granted the fact that we can turn our bodies halfway around to look at something, or that our heads have full range of motion and aren’t restricted. I was also able to realize quite quickly that several artists were non-verbal, but were very engaged. Using sentence starters, nodding my head yes or no, and reading facial expressions allowed us to communicate. For those artists who did not write, their stories were dictated line by line as I prompted them, they thought, they spoke, I confirmed or clarified, and then we agreed on a sentence. The collaboration was exciting! We had time at the end of class for sharing. Here is a snapshot video of two especially inspiring moments of teamwork and support. For more footage and stories, please attend our Literary Festival session Friday, September 13 at 7pm in the Town Center Legacy Room.