How to be your own best editor 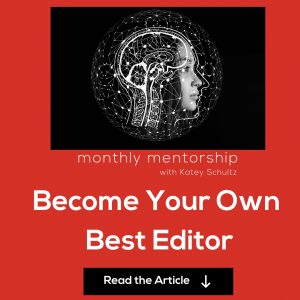 Recently, I critiqued a short story written by a potter. Our acquaintance first formed when I was a barista slinging espresso at Penland Coffeehouse and he was a studio potter headed for an 8-year detour in academia. But we stayed in touch, even if that meant a “hello” at the grocery store or a wave in passing along the two-lane. Now, he’s back to full time creating (and relaxing, I hope) and I’m fully self-employed, book-toured, married, parenting, and mortgaged. I found his questions in response to my critique were useful and provocative, and I suspect they might prove beneficial for others working on short fiction. Here’s an excerpt from our exchange, and if you enjoy this kind of mentorship that helps writers learn how to become their own best editor, please consider working with me and a cohort of other writers in Monthly Mentorship (don’t delay–program fills quickly).

Terry: My stories come from scattered memories and numerous freewrites strung and tied together. I get involved with character development, with watchful observation—but I don’t often consider underlying theme or motive. When I look at someone like Hemmingway or Carver, I guess I look at how they build the story with description and/or dialogue. I’ve never thought much about the theme, except as a way to tie the ends up in a story.

Katey: If it helps at all, I’ll share with you that I personally buck against the word theme, but it’s often a word I can use when teaching, because most everyone has some understanding of what it means, from high school English. In terms of thinking like a writer, rather than theme, what I find more useful is this:

What is at stake for Larry?
What are his desires and what are the obstacles preventing that desire from manifesting?

HOW you answer these questions will reveal your “theme” for lack of a better word, and consistency and authenticity are key here, because later—in deep revision—the choices you make in answering these questions will quite literally inform your word choice. One verb will be the right, best verb. Other verbs will not, etc. But you can’t know that beforehand; rather, in revision.

Terry: I intend to rework the story using the structural changes you suggested—perhaps this will assist or influence my understanding of the character Larry. Can I expect to find the story’s meaning by exploring character and restructuring the story parts?

Katey: Yes and no. The key is that you clearly understand that by revising, you’re looking for clues and looking to unearth any messages you have left for yourself. And from there, DON’T BE WEDDED to any of your existing content. When we cut and paste too much, we can forget that the sentence we’re really searching for is one that hasn’t actually been written yet. So push a beat further in those places I suggest, and really ponder WORLDVIEW. Character development sounds nice, but it really only means something if you are letting readers see the world as if through Larry’s eyes, and how Larry sees has absolutely everything to what he desires, and what’s in the way of that. That’s life, really; that’s story—we want something, we can’t get it. Repeat.

Terry: In your critique, you told me that “The idea of being ‘seen’ or of use or understood in the world, especially when we’ve lost someone we may have defined ourselves against, is utterly compelling. In your story, I find it unique and lovely that this dilemma arises between two brothers.” Is this an example of what would be the overlying theme?

Katey: Yes, precisely. So here let’s say that Larry’s obstacle is that no one ever really sees him for an individual. He’s only ever been defined against or alongside his brother, whom he loves, but whose presence also somewhat held Larry back all these years. Now that the brother is gone, what’s in the way of Larry being seen? Does Larry want to be seen and what will he discover about himself once he lets the world see him, and lets himself see himself? Etc. And from there—structure comes into play, because you can ask your writer-self: What scenes do I need in order to reveal the answer to these questions in absolutely concrete ways? What is the most effective, expedient way to reveal this? Etc.

Terry: When I reflect on the story as it is in this draft, the overarching theme is a kind of malaise in Larry based on some unexplained loss. Perhaps his brother’s absence is a symbol of that. Is that too vague? Is it important to identify the cause of his malaise?

Katey: Yes, that is too vague. “A kind of” [malaise] and “some unexplained” [loss] is absolutely too vague. But if you name the malaise with precision and if you clarify the exact loss, now you’re getting somewhere. And of course, you still need to see how all THAT balances with the equation of desire and obstacles. It’s like math, with emotions, really. Fascinating if you can stand to let yourself revel and ponder.

Terry: Clearly something is haunting Larry, be it reality-based or mind-manipulation on his part. I assume that you are suggesting that I explore Larry and his world more in order to determine and clarify for the reader his state of mind/state of being—his motivations, intentions, actions—is this what you are suggesting?

Katey: Yes and no. If you just want to play around and explore, then write to your heart’s content. But you may never finish or have a draft on your hands that you feel is emotionally and creatively complete. If you want to complete the piece, then now is the time to make some writerly decisions. Think, journal, take Larry on a walk with you in your mind. Answer the questions I have posed; don’t let yourself off the hook until you have some answers. THEN write your way toward showing those answers on the page.

And of course, it’s not so black and white or this way, then that way, as I’ve described it. But it can be, or pretty close to what I’ve described, and so here you just go with it and “fake it till you make it” and come into your own flow between thinking/answering questions and then writing….until you have something that feels true.

Terry: Is your point that it is important to establish the theme(s)? That I am being too vague in this draft?

If you’re curious about how to become your own best editor and apply thinking to language for a current piece of work, reach out for a 20 min pro-bono consult here.