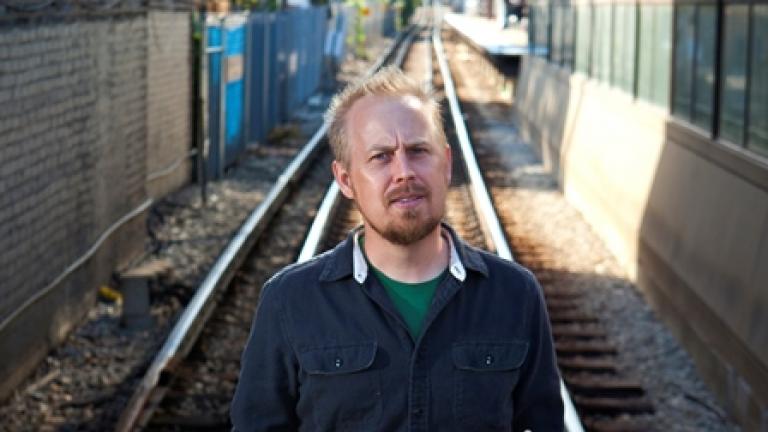 This month, Airstream Dispatches participants are reading The Answer to the Riddle is Me by David MacLean. The New York Times has described this book as “raw, honest and beautiful.” A memoir of amnesia told in quick bursts of flash nonfiction, the chapters build to create a kaleidoscopic portrait of identity. Read more to learn about David’s unique approach to memoir, and what’s up next for this Chicago-based author.

Katey Schultz: Your “postlude” begins with an epigraph from the poet Larry Levis: “I know this isn’t much, but I wanted to explain this life to you, even if I had to become, over the years, someone else to do it.” What greater purpose does memoir serve? In other words, what kept you grinding through memory, craft, reflection, and insight as you drafted your own pages, and how might you advise another writer who may doubt the value of his/her own story?

David Stuart MacLean: For me memoir is a lot about humility. I think we often think we live our lives as brains floating through the world (or at least that’s how we write about our lives). But we really live our lives in our hilariously misbehaving bodies. For me writing is about letting myself see what happens when I let my fingers, my wrists, and arms tell my life story. Writing is a muscular act and we allow the muscles and the memory stored in muscles to have an almost level playing field with the memory in our brains. The best memoirs emerge as a dialogue between the body and the mind.

Memoir also allows for all of the micro-emotions we have to assert themselves alongside the tedium of what happened. Bad memoirs are all ‘What happened was this”; they may be great anecdotes but they fail as memoir. The best memoirs dig into all the fears, and hopes, and bad data that clouded us when the big moments happen in our lives. Our lives contain such chaos and possibility.

KS: This next question comes as a follow up to your response. This is from one of my Monthly Mentorship participants: “I love what you say about writing being an act between body and mind. I’m curious how this plays out for you—as in, can you actually describe what that looks like from the outside, or what it feels like on the inside. Do you do anything intentional to mine those ‘fears, hopes, and bad data’ that are so necessary in telling a good story?

DSM: I keep journals when I travel and I always take a lot of pictures. It’s also the nature of this experience to make one fairly possessive of any memory you do have and to grab and populate any scrap of memory that floats into your head.

Practically, I just try to slow down and populate each moment with the fears and hopes and little whiffs of weirdness that are present in any single moment. I try to ground me in my physicality by body aches, uncooperative underwear, and belly stuff (I have a weird stomach so the belly stuff is legion). I think we move too quickly to the diagnosis or judgement of a moment. It’s part of how we protect ourselves. There’s safety in knowing what happened. It’s counterintuitive to write without that knowing. I think of it like how a boxer has to learn how to lean into a punch. I’m always relearning how to lean into punches.

KS: A participant in Airstream Dispatches asked: “It seems you created yourself into a better person than who you might have become, had Lariam not entered your life and your body. Would you mind sharing your thoughts on this?”

DSM: I think I have always been a person who is self-critical and self-punishing. What you might think of as me as a less better person really is a manifestation of that tendency and how that tendency became weaponized against myself because of the trauma. As a writer I shy away from presenting myself as the “good” person. George Orwell said that “journalism is printing what someone else does not want printed, everything else is public relations.”

This quote is applicable to memoir. Writing what part of yourself doesn’t want to be written? That’s the whole thing about being vulnerable and pushing past our everyday lived-in truths to get to something larger.

KS: I’m ready to take a class in creative nonfiction from you, now. Wow! Thank you for that response. This next question is also from a participant: “Your writing intersperses memoir with informational text (history of malaria, pharmaceutical history, etc). I liked that and I thought the informational text was just enough so that the reader didn’t exit the story line. How did you determine when the timing was right to make the shift to some informational text/research?”

DSM: For a while I thought of the book as composed of three acts. Act 1: the incident. Act 2: the research. Act 3: the aftermath. In this structure I was thinking of Ted Conover’s book New Jack, which has an amazing history chapter of penitentiaries in the US. It was also the chapter that my students would bitch and moan about the most as boring.

As I started structuring the book, I realized that the rhythm was off with the big baggy research chapter. So instead I decided to integrate it and match it to different moments when that information came into my life. I wanted the science to be filtered by the brain of the character of me in the book, so it replicated the impossibility of knowing anything and the clumsiness of this new vocabulary that I had to navigate (prodromal, protein gap junctions).  I also liked it because I was able to decenter the science as the de facto authority of the experience. It’s good information but it works best when a character is trying to navigate it alongside the reader.

Allergy puts the agency within my own body, which while not really under my control, it’s more control-adjacent (psychologically).

A side effect puts the agency in the drug itself.

And that was a process of understanding for me which mimicked the way that I viewed the incident. I blamed myself for years and I might’ve needed to because it allowed me to feel in control. If it was just the drug, then the world was chaos and how could I ever think to put things in my body ever again? And in the end, it’s somewhere in the middle. The world is a tricky mixture of chaos and order. I want my work to be similarly tricky.

KS: David, this is all so phenomenal and precise. Thank you for this sharing and your wisdom. One thing I like to ask every writer I interview is they’ll share a “tiny moment” from their writing career with us. “Tiny moment” is the phrase I use for a moment/experience/millisecond in time that has stayed lodged in your memory. If you can, try to share what “before” or “after” were like for you, as you render this memorable moment and why you think it influenced you as a writer.

DSM: The very best moment in my writing career was meeting the amazing short-story writer and activist Grace Paley. We’d been chatting about a story of mine and I asked her how she revises for voice, since she’s a genius at voices. She paused and stared into my eyes and said, “First, you have to see past your bullshit.” The bigness of that statement is huge. I didn’t think of writing like that. I still thought that successful writing was my keyboard taking perfect dictation from my brilliant brain. Afterwards, I saw and see writing as an opportunity to slip past my bullshit (cultural, social, racial, gender, orientation). Seeing past your bullshit is frequently how I’ve taught essay and memoir (to mixed results). I just feel like I live with the lies and self-justifications that make life passable or palatable. I don’t want my writing to be just another vehicle for those lies.

KS: Let’s end by celebrating the work of another author. Tell us about book(s) that recently rocked your world, and why.

DSM: I love Thea Lim’s novel An Ocean of Minutes. It’s a lovely meditation on things that seem incongruous class, race, love, memory, and the debts and credits that create a relationship. And time travel. It’s phenomenal. Gillian Flynn’s Sharp Objects is that rare example of a fantastic novel (to me, Flynn’s best) made into an outstanding television show, written and overseen by the author herself. Each interpretation is excellent in the use and awareness of its medium. I’ve loved Flynn for years. Now I’m in awe of her. Mat Johnson’s Pym is one of my fave books. Same with VictorLaValle’s Big Machine. They are these gorgeous contraptions full of mystery and weirdness and depth. I geek out a lot about Virginia Woolf and James Baldwin. W.G. Sebald and Teju Cole. Susan Sontag and Hilton Als. F. Scott Fitzgerald & Nathanael West. I like to cross-read a lot and these writers bring out a lot out of each other.

KS: Thank you so much, David! I’m enthralled with your writing.