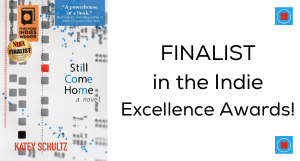 Close on the heels of her recent Foreword INDIES Book of the Year recognition, Loyola University Maryland’s Apprentice House Press is pleased to announce that Katey Schultz and her recent novel, Still Come Home, have won another prestigious award, being named a Finalist in the 14th Annual National Indie Excellence Awards. Still Come Home received this honor in the Military Fiction category.

“What really amazes me about Katey’s writing is that she has an uncanny ability to take the reader into the scenes, the villages, the lives of the people who are experiencing war. She captures perfectly the complex emotions of the soldiers in combat, the people of the country where they fight, the returning warriors, their families and friends as each tries to make sense of their lives. She’s a unique and very, very talented writer,” said Jack Segal, former senior US diplomat and former chief political advisor to NATO forces in Afghanistan from 2001-2011.

The National Indie Excellence Awards celebrate independent publishing as a strong and vital sector of the publishing industry. NIEA champions independent presses who produce the highest quality books across a spectrum of metrics. Established in 2005, NIEA’s entrants are meticulously judged by experts from various facets of the book industry profession, including publishers, writers, editors, and designers. Winners and Finalists are determined on the basis of superior written matter coupled with excellent presentation in every facet of the final published product. Jurors value the synergy of both content and form as they review entries spanning multiple genres.

Set in both Western North Carolina and Afghanistan, the three characters in Katey Schultz’s novel are each searching for the best way to be, the best way to live—all the while fighting cultural, societal, and political forces far beyond their control. As their paths intersect over the span of three days, Still Come Home explores how their decisions will forever alter each other’s lives.