Craft Tool: Knowing is Only Half the Battle 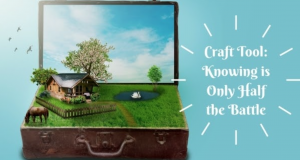 Flashback and backstory are often taught as structural components of prose. They are. But knowing a craft tool definition is different from understanding its application. As they say, “knowing is half the battle,” and in Monthly Mentorship this month we focused on that other half of the battle–what to do once you’ve identified your flashback and backstory, and how this can guide you in revision or generating new material to make a draft stronger.

Think about favorite pieces of your own writing. What is your personal preference for using flashback and backstory, as a writer? Perhaps you use them to reveal information or tease your readers about a secret ending or big reveal. Maybe you add backstory because there’s no other way you think your readers will be able to make sense of whatever scene comes next. Maybe you use flashback too much, and you know it, but you’re unclear about how to avoid that trap.

Whatever the case, understanding what’s “under the under” of your efforts in flashback and backstory will help you decide if your writing is actually being effective. At the end of the day, these tools not only pace the plots of our stories, novels, and memoirs…they give us tremendous creative power in controlling how a reader perceives our characters (or ourselves, in the case of creative nonfiction). The seeds we plant using flashback and backstory pave the way for the concluding beats and pages of our writings. If we don’t know how to be intentional about that, it’s going to be very hard to come to an ending we (and our readers) can believe in.

To help my monthly mentees get a sense for coaching themselves toward their own best decisions with flashback and backstory, we worked through a series of questions, prompts, and provocations that helped them:

If you’re curious about how to make some of these decisions in your own writing, or how flashback and backstory can unlock clues and prompts for new writing, read about my Monthly Mentorship program for serious writers. Fill out the questionnaire and I’ll reach out for a free video or phone consult to discuss your goals, needs, and the best path toward becoming your own best editor, for life.