0
0
I’ve tried lights on, doors locked and lights on, doors unlocked. Then lights off, doors, locked and the next night—lights off, doors unlocked. I’ve tried night songs and day songs; even a modified version of Peter Pan’s “I do believe in fairies [ghosts], I do! I do!”
Still, they will not show themselves.
Of course, I don’t really know what I’m looking for and I’ve always said I don’t believe in ghosts. However, two people have seen the ghosts of Weymouth and two people have not. That’s out of our people surveyed. I’ll say it now: let me be the tiebreaker!
I’m starting to feel like the ghosts of Weymouth are like the grizzlies of my last Alaska trip—every present and equally invisible. By now it’s clear that last week’s woman-hollering-in-the-night incident must have been a real human; a nutty human who happened to be underneath my balcony, but a human being at that.
That aside, the windows of this house shake randomly throughout the night. I hear doors open and close in the far reaches of the mansion. I am alone, but I am not. At least half a dozen times, I have been unconsciously pulled from my focus at the keyboard and turned to look at someone who has just entered the room. It’s not until I find myself staring at the blankness that I realize I acted on instinct—that gut feeling that someone just walked by and the follow-up gut response to take note of who it was.
These sounds and energies, the almost unending flow of invisible movement throughout the mansion, have not gone unnoticed. Be they ghostly or saintly, they’re abundant. Consider this, from another poet whose work is posted along the walls:
Now We Are One of Them by Sallie Nixon
Along so many wooden ways they move—
through halls and doors, up stairs and down—
all those minds in the monastic night.
A cough,
a sigh,
paper crumpling—
and then the day, left to us.
To awaken here is the thing:
A buzz breeze wafts upward
a morning call of pines,
naming us,
one by one, now
of Weymouth. 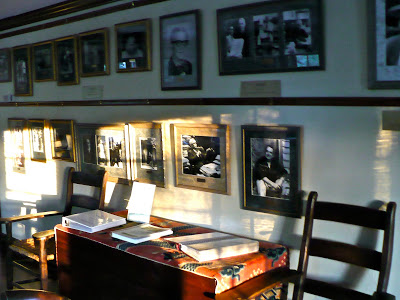 [Evening light cast through the windows in the NC Literary Hall of Fame, the sighs and coughs of these inductees perhaps still holding court in the night.]