WWHD: What Would Hemingway Do? 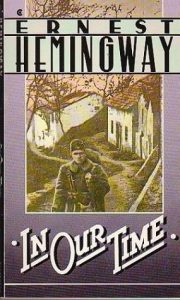 I was invited to write a guest blog post for SmokeLong Quarterly’s “Flash, Back” series, which asks writers to discuss flash fiction that may be obscure or printed before the term “flash fiction” became popular, and explain how these older or not widely-known works are meaningful. I decided to write about how Hemingway’s In Our Time allowed me to embrace flash along side traditional length fiction. It was delightful to revisit this topic and an honor to collaborate with one of today’s best flash publications. Here’s what I had to say…

“We waited till he got one leg over and then potted him.” This line, from Ernest Hemingway’s In Our Time, is one sentence from an eight-sentence story published by Scribner under the heading, “Chapter III,” in 1925. The piece, which might be labelled today as somewhere between a dribble (50 words) and a drabble (100 words), is 75 words in length. When I finished reading the story, I didn’t care what it was labelled. I knew I’d never be the same again.

Not because it was Hemingway, mind you. And not even because the piece was so beautifully short. But because of the verb “potted.” The entirety of the war—the senseless waste, the black humor, the scale of loss that leads to dissociative language—seemed summed up in that one, keenly appointed verb. To kill a human being should never be to “pot” one. And yet…Hemingway potted that soldier, and, as the story concludes, “Then three more came over further down the wall. We shot them. They all came just like that.”

It’s worth noting that I read this story sometime around 2011. The number of rejections for my first book…READ FULL ARTICLE HERE.