The Story I Most Enjoyed Writing 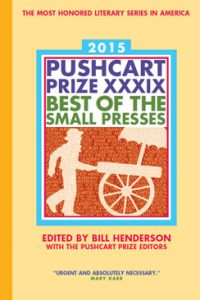 It’s a quiet, dark joke between writers that “fewer than 1% of Pushcart Prize nominees” ever actually WIN the prize. I don’t know whether that’s urban legend or fact, but I do know that I received my 5th nomination this week and even pessimistic stats can’t keep me from feeling grateful. Pushcart nominations come directly from the editors of small, independent, reputable, literary publications. Of all the stories, essays, and poems published during any given calendar year, the editors choose one (or sometimes a few) pieces to nominate. From there, an intense series of reading and judging begins, as anonymous readers (highly reputable, past Pushcart winners) mark each nomination as rejected, or as worth passing along to the final judges. Many, many months later, Super Famous Writer on High, along with a team of other Super Famous such writers, will make the final decisions and the winners will be published in a coveted annual anthology. What do folks call this anthology? THE BEST OF THE SMALL PRESSES. And rightfully so! It’s a great collection to study and enjoy.

Why does being nominated, or even winning, matter? First, it’s nice to be singled out and celebrated. It’s hard enough to get something published. From there, to have an editor further recognize a writer’s work through a Pushcart nomination is definitely notable. And someday, as I hope to eventually make it into one of those anthologies, I’ll know my work is canonized in quite a good place indeed. Furthermore, for writers looking to make a name for themselves or make their mark on the map, getting it into one of these anthologies means editors and agents from many, many other literary venues will take note your name and talents and possibly follow what you do. With so many gifted writers in such a prolific creative time period, where would an editor or agent looking for new, great talent begin to search? In a Pushcart winners’ anthology, of course!

So it’s with excitement that I can share this news with my readers today: Consequence Magazine has nominated my story, “What the Water Teaches,” for a 2016 Pushcart Prize. In doing so, and to help celebrate, the magazine has re-printed the story in full online (previously only available in full via print subscription). You can read it for free right here, and take note–this is a story I hold near and dear to my heart. It may be a story I’m most proud of and most enjoyed writing. I hope you enjoy it, too!