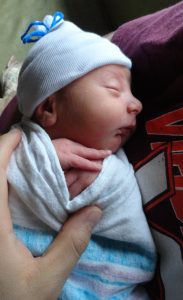 My water broke around 2:45am on Saturday morning, November 12, and the first thing I did was call Brad. Anticipating the largest paintball scenario game on the East coast, he was camping 90 minutes away with 1300 other players, ready to give it their all for the weekend competition. Brad answered, but his phone died immediately. I called the hospital and within about 20 minutes had reconnected with Brad (who found another phone), spoken to our midwife Kirsten, and confirmed that, indeed, the baby was coming.

While I waited for Brad to make the drive back home, somehow I decided to send a few emails: The first went to Mom, telling her “we can laugh about this later,” and then I emptied just about everything in my brain—from appointment cancellations to rotten food in the fridge. Surely there were others messages…it didn’t matter, it was time to get dressed and load up the car. But through the dim moonlight outside (the air was filled with smoke from a raging wildfires just 20 miles away, and would remain smoky for the next two weeks), I found these tasks surprisingly awkward. It was definitely time to lie down and rest, while I could.

By 5am, we were at the hospital and Margot (our acupunturist, birth attendant, and friend) arrived not long after. By 9am, my contractions were coming every 5 minutes. Brad was so strong and delightful—he had the staff cracked up several times, and me, too. Margot helped with her confident presence and reminders to keep my jaw loose and my voice low, my breathing long and deep whenever possible. For the next 14 horus of active labor, transition, and birth, I remained in almost constant motion. The yoga mat, the balance ball, leaning backwards on the recliner, perching on the edge of the bed, walking the halls…It felt as though I was weaving a net with my footsteps.

I suppose, looking back, that the “hardest” part was feeling the physical sensation of wanting to push, then working with my mind and body to persuade it not to push. Not yet–my midwife instructed, and her instruction proved wise, as I was ultimately able to give birth without drugs and without doing any damage to myself. The urges to push were all-consuming, and although I lost track of time and events for many hours, I can say now that those urges felt like sort of natural disaster inside of my body. (Think good, epic: tectonic plates shifting but trying not to let them crack, or a tidal wave building but trying not to let it break.)

When it came time to push, there was no choice about it. How much did it take? I don’t know; perhaps 5 pushes (made of 3 pushes each). Perhaps 8. Margot tells me I worked admirably hard. To me, everything was beyond measurment or depiction; the experience simply grew into everything I had. My voice, my body, my being. It felt as if that voice and breath could go on forever–from head to toe, past to present, even into the future–if I needed them to. As long as I could ride that sound, which became my body, our baby boy would meet the world.

And so he did. At 11:04pm on Saturday, November 12th, River Ramone Quillen was born with curly black hair, a Quillen nose, Sicilian earlobes (“flabadonks,” we lovingly call them), and epic Schultzy-toes. We spent all day Sunday and Sunday night at the hospital. River slept on me or on Brad, every moment. At one point, Dr. Mitchell came by and told us River was healthy and strong, by all counts of his examination. He held out his forearm and looked at it with awe. “Right now, River fits right here,” he told us. “That will only be true for so long. These first few weeks, first few months—there will be days that feel like they never end and they will be hard. But you will look back and see that those days were very, very short, and that your child can no longer be held between your hand and your elbow.” 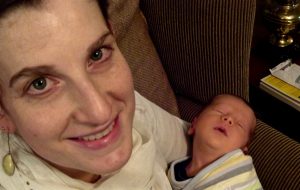 Other voices of nurture and expertise entered and exited through the day and night and I remember most of them as floating. A few stood out: The older nurse who had the firmest hand of all, and really got River to latch on (“I’ve been doing this a long time,” she offered, then she looked at me. “I heard you did good work,” and smiled.) The nurse who arrived during labor “transition” and seamlessly eased into the crew, then encouraged us to try nursing as soon as possible (she’s a mother of three). She came again the next day (this was how I knew that time was passing; as shift nurses appeared again and I understood that the sun must have risen and set). We were the only people in the labor and delivery wing and were expertly, but never over, attended to.

Sometime early Monday morning, we brought River home. For a little over a month now, neighbors have brought food and checked on my recovery (which is going amazingly well). Last night, Brad and I both saw River’s full-faced, toothless grin at the same time. And so—the Super Moon that hung high in the smoky sky during November’s birth has already started to wane. But I saw its light during its peak. How bright and capable; gravity pulling. 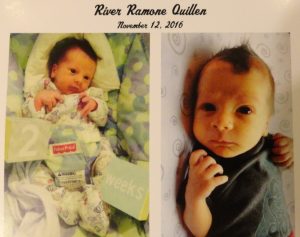