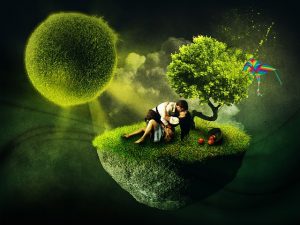 What happens when a women dares to kiss a stranger?

A while back, one of my writing mentors wrote to me that a woman walked up to him in a bar one night—a total stranger—and kissed him on the lips, then walked away. Sometimes, stories are given to us. I have no idea what the particulars of this moment were between two strangers, but I don’t need to know. When my mentor wrote to me, I responded to him with an experiment in flash form writing:

He is not Thomas Halloway but she is just two paces from the corner seat where the brim of his hat flirts with the dim table light and she is driven now by something larger than nostalgia. When a woman kisses a perfect stranger in a bar, wordlessly (save the poetics of flesh), it is because she thinks he needs to be kissed. There is a very good chance it is also because she wants to believe it will always be this simple. And it is, at least for now. Touching, then not. Lips, then none.

The man is stuck in the kiss, long over by now. He didn’t see her face when she turned to leave, but he imagines it was almost parental–toward herself, toward him, same difference in this story. She exits the bar, heels hitting the pavement beneath the buzzing pub sign, and she can feel its electric pulse twinge beneath her skin. She can see her breath caught in the neon light, evaporating promises. She can hear something louder than herself, zooming down the highway in front of her, and she lets herself leave with sound of it.

So…I got a few paragraphs and images, and most of all, I got an emotion that I know is true. Have you ever experienced this? And not known what to do with the gems you feel you’ve just written? It can be hard to let them go, or to find their better context. But it doesn’t have to be.

There are some accessible essentials to the craft of flash form writing.

I’ve taught the essentials of flash fiction and flash nonfiction to literally several thousand writers (if you add up all the workshops, all the years!). They’re tried and true, and writers I’ve taught these to often get results.

I offer two courses in Flash Form Writing that will tap into these essentials. The first Flash in a Flash is a 5 day e-course in FUN! You get daily prompts, and email access to me, to help you dive into a new way to write. Most important this course is for all writers whether you’re published or at the skill-building stage, I welcome the curious and experimental writer to try a new medium.

My second course, Into the Flash only runs in April and is a live, 5-week course conducted via distance. The flash form will serve as a training ground for slipping into the skins of your characters, mastering scene, celebrating compression, and uplifting metaphor. Email me to get on the early bird list.

(And when all else fails? Kiss a stranger in a bar just to see what happens next.)